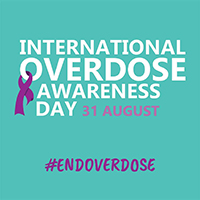 MONTGOMERY, Ala. – The Alabama Department of Mental Health pauses to commemorate August 31st  as International Overdose Awareness Day (IOAD), a global event to remember those who have died from a drug overdose.

According to data released from the Centers for Disease Control and Prevention, drug overdose deaths were up 35 percent in Alabama in 2020 compared to 2019. Alabama is not alone; the national average saw an increase of 30.9 percent. With the issue of addiction already having existed prior to the pandemic, the stress of the pandemic may have influenced higher rates of substance abuse in communities statewide and nationally.

IOAD day serves as a day to raise awareness not only about drug and substance abuse issues, but is also aimed at educating community members of resources to battle both addiction and overdose throughout the year. To recognize the national event, mental health, substance use disorder groups across the state are holding numerous events to remember lives lost, celebrate the survivors of overdose, and empower others to seek the help they may need.

What can you do for yourself or for loved ones?

What can you do to honor this day?